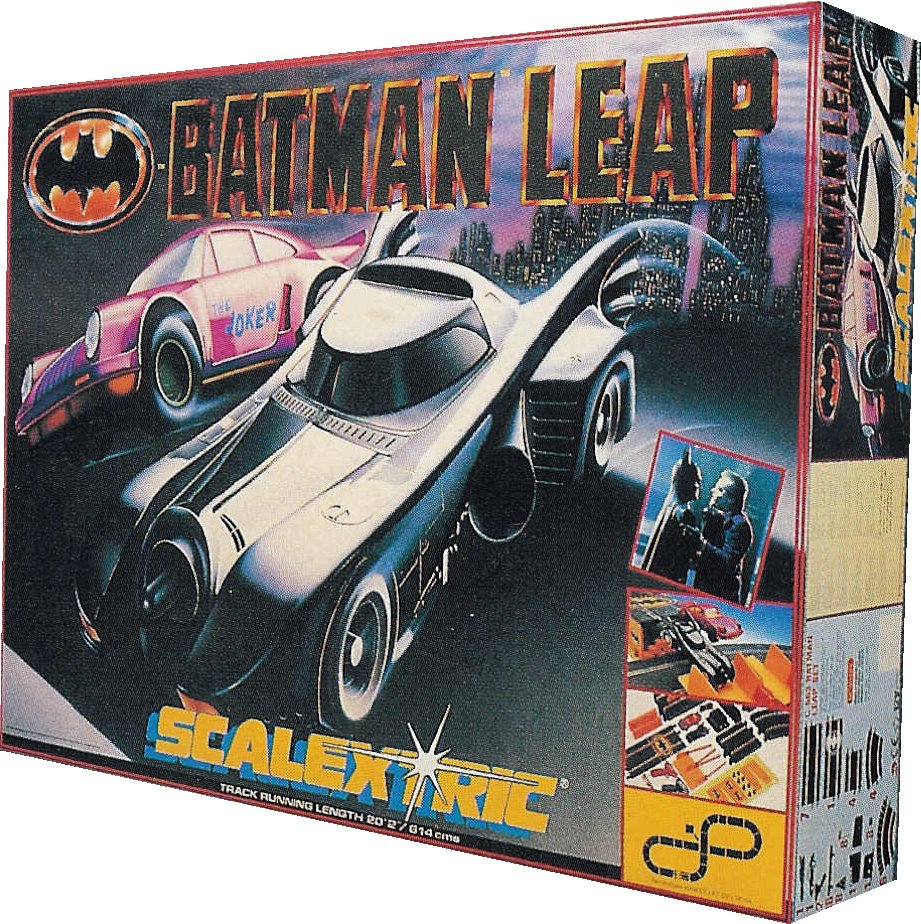 The quote above is from Batman Forever, uttered by Batman. Though the phrasing might not be PC correct today, is the Batmobile in vogue as a collectable object?

TV & Film related Scalextric products usually sell very well and the Batmobile is no exception. Other Film related characters include Starsky & Hutch, the General Lee car in The Dukes of Hazzard and, of course, one of the most sought after Scalextric cars, the Aston martin  and Mercedes from the 1960’s films era as well as the Aston Martins and Jaguar from the Bond films of recent years. Depending upon what generation or era you relate to might determine which Bond car means the most to you- as perhaps it will be with the Batmobile cars.

Unfortunately we have to discard arguably the most famous Batmobile – based on the Lincoln Futura concept car with open top cockpits, black livery with the distinctive red pin-striping – from the 1960’s Batman TV series era. That car would have been a top seller as a Scalextric car, I think. Most likely because of a difficulty to obtain such an attractive and possibly expensive license, Scalextric did not model this car. Possibly having the James Bond license in the cast was enough though.

BATMAN/BATMAN RETURNS BATMOBILE
So, Scalextric would see another twenty years pass before the opportunity of adding the Batmobile to the Scalextric range. The film Batman (1989) and Batman Returns (1992) revealed a new Batmobile car, a long sleek creation with features galore such as shields, machine guns and much more. Very James Bond-esque! In 1990, Scalextric released two Batman sets (C562 Batman Chase and C563 Batman Leap) as well as releasing the car C465) as a solo item.

Scalextric put together quite an inexpensive item in that the car was a simple affair. A chassis, a one-piece body, hubs from the Ford Sierra, axles, motor, wiring, brown magnet and guide blade. It doesn’t get much simpler than that – today we would refer to it as ‘Super-Resistant’. Not to belittle it in any way, like the film car, it was ‘atomic’ on track, the fastest vehicle in the pack.

A variations does exist. The rear upright wings were designed with a moulded round tip at the rear most end of each wing. The design was later changed so that the round tip was removed. It has been suggested that this was to remove a delicate object from the car that children might bite off but it was more likely a tooling problem where a high percentage of these extremities were not forming properly when the plastic was injected in to the mould tool and so a decision was made to simply remove it from the equation and reduce the number of rejected body tops. 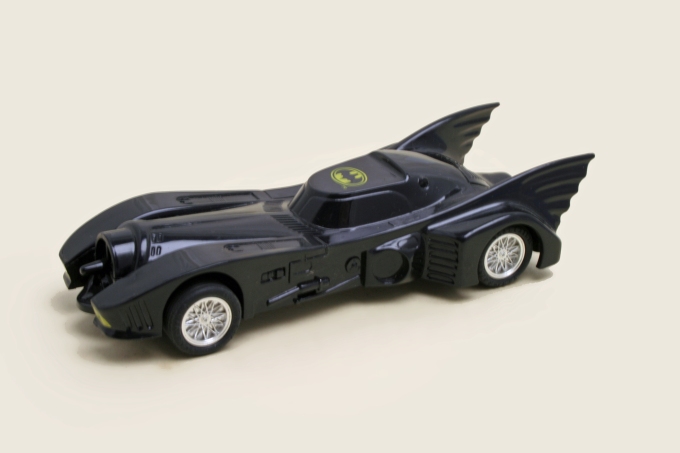 Pre-production Batmobiles are hard to find but are well known in the Collector world. Perhaps most hard to find is a clear plastic mould flow test. A handful of blue cars have been seen in various stages of their pre-production life. Green bodies are slightly more common. All colour variants have been found in with or without the yellow front lights and Batman roof logo. Early pre-production Batmobiles with a plain black chassis with no brand and safety embossing are also out there to be collected. 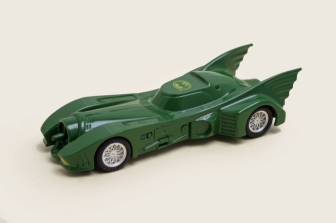 A factory example made in green but never released in this colour. 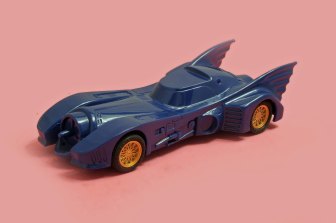 A factory example made in blue but never released in this colour.

TUMBLER BATMOBILE
The TUMBLER was released in 2005 as a limited edition boxed presentation pack (C2669A) mate black vehicle with a Ford Crown Police Car as well as in a regular Set ‘Batman Begins (C1157) with both cars.

It was also released as a regular solo car and then again in 2012 as a boxed presentation pack as a ‘camo’ livery (C3333A) and regular issue (C3333). The TUMBLER car features twin wheels on each end of the rear axle and two small diameter wheels at the front. Again, like its fore-runner 30 years previously it can be described as super-resistant. The modelling scales of both the Bat car and the Ford Crown police car are undersized and not equally so. The police car is down-sized to near 1/43rd scale. At the regular 1/32nd scale the TUMBLER would have been far too big to allow a police car in the other lane and is about 1/36th scale. Therefore, both had to be down-sized in scale so that they were in proportion with each other – a compromise. 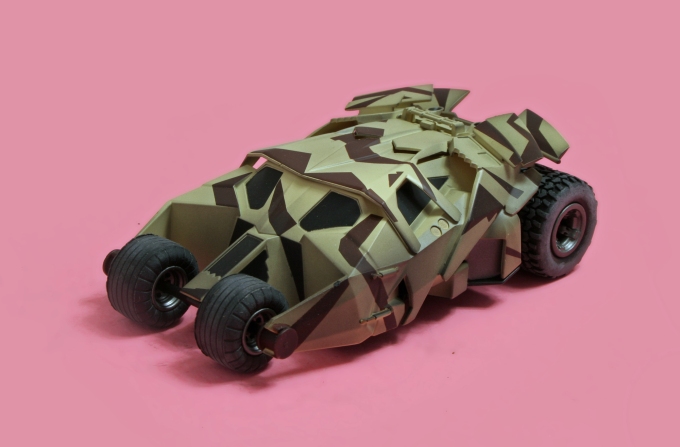 Which to collect, then? “It’s the car, right? Scalextric fans love the car.”

They are both collectable and will always be popular. Throughout the past thirty years the standard production issues have never commanded any value despite their TV/Film iconic popularity. Whether from the 1990s or from this decade the Scalextric models can always be purchased at a cost near their original retail price. Pre-production items can command up to ten times their original shop prices.

If preferring to include pre-production models in a collection then the Batmobile options definitely represent an interesting range. There is a big following for anything that is different or reflects the story behind Scalextric through the various production steps of a product’s development. If you just don’t like the idea then, in Alfred’s words, “The Lamborghini, then!”