It is often impossible to ascertain what Russia has been responsible for despite ‘evidence’ or conjecture. So it is with the story of Scalextric produced in Russia! Did they or didn’t they?
Many Scalextric enthusiasts are aware of the NOVO branded Scalextric sets. BUT! Were the Sets made and sold in the UK, Russia or somewhere else? 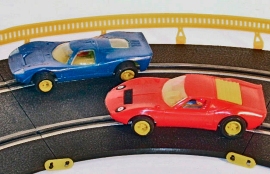 In 1975, a British company called Novo Toys Limited was founded and were based at Maxey, near Peterborough, England. Novo Toys was part of the Dunbee-Combex-Marx Group of companies which owned Scalextric. An announcement of that year from DCM explained:

“Novo Toys enjoys and exclusive agreement with the Soviet Union to supply moulds and tooling to enable them to help satisfy a growing internal market of some 70 million children. Payment for these moulds is made in products moulded from them and this form of compensation trading is unique in the Britih Toy Industry. Novo personnel are constantly travelling within the Soviet Union and our engineers ensure that high quality standards are maintained. Our range this year covers pre-school items and construction kits and features the successful Big Big Train. New to Novo is our G.T. Racing set together with twelve new additions to the kit range. Shipments from Russia arrive by road trailer from six different locations situated from Moscow to Tashkent and all merchandise is received and inspected in our warehouse in Maxey before being shipped throughout the UK and around the world. Novo Toys is a part of the Dunbee-Combex-Marx Group of companies and is therefore able to draw from an ever increasing supply of moulds and tools which in turn should ensure that a continuing range of attractive products at competitive prices wll be added to the Novo range in the years to come.”

Another Novo leaflet, printed in 1978, in English with Spanish translation, announced:

“New for 1978 Novo introduces “G.T. Racing”, a super value slot racing set. Over 4 metres (420cms) of dual lane flexible track with high speed curved banking ensure record breaking speeds from the Lamborghini and Mirage Ford which are included in the set. Variable banking supports and crash barriers help keep the cars on the track and speed is controlled by the pistol grip hand controllers.” G.T. Racing set was catalogue item 78001. 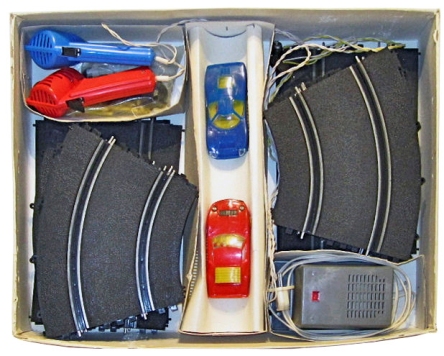 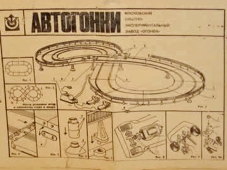 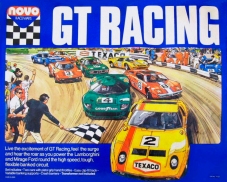 The Novo set was NOVO, of course, but all tooling still had the Scalextric logo and patent information engraved in to the steel so the resulting plastic products had the well known Scalextric logo and information moulded in to the plastic. The Sets were made with the very tooling that DCM owned and used at the Margate factory so the Sets were genuine Scalextric products made in the USSR under license. Paperwork in the Set was in Engish entitled “Auto racing”, “Test-experimental (proof) Office of Moscow”, ”220 volts”, “The toy”. “Electronic toy assembly. “The training path”, “Guarantee education” and also a note showing a production run of 15,000. The set had two cars; C15 Ford Mirage and C17 Lamborghini plus various track sections. This was made in St. Petersberg and had ‘Made in USSR’ stamped underneath. The Ford Mirage was made in a drab green colour and the Lamborghini in a pale yellow. 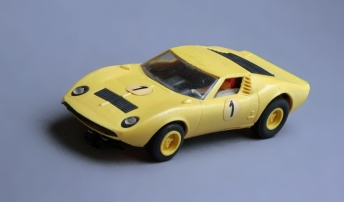 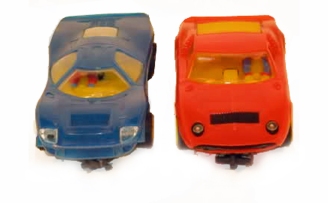 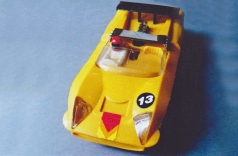 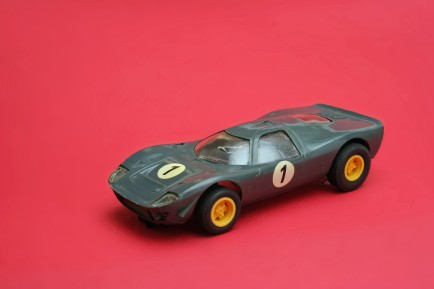 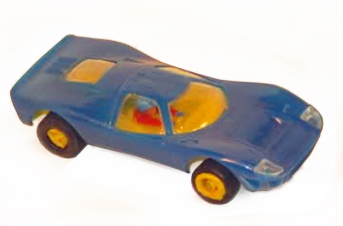 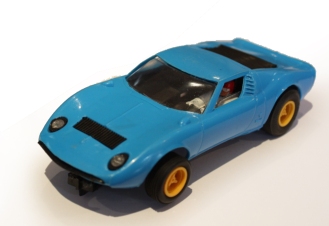 In addition it is possible that a Ferrari P4 was made but in a dull red colour. The C13 Tiger Special was also produced, with ‘Made in USSR’ on the underside, and sold in bright green and yellow versions – two very rare colour variations to collect. All cars appear to have been fitted with yellow wheel hubs.

The second version of the Set was manufactured in Moscow, and possibly at several other Russian locations, for the Russian market. The Set card box is made of a heavier card with the set artwork very similar but the text and titles were all in Russian. The cars and track also varied considerably from the St. Petersberg made items. The engine and axle carrier/chassis used a different moulding without the ‘U’ shaped aluminium bracket, the guide blade is larger. The driver pan is different because of the new rear axle/motor assembly but the motor is the same as the Novo motor. The track and barriers were also a new tooling. The track had a sleeved slot, metal rail pins to connect one track piece to the next and a yellow plastic links which hooked on to the track edge corners to physically hold the track pieces together. The barriers had a ballastraded design and the controllers no longer featured the name Novo. The car bodies of the Lamborghini Miura and a Ford Mirage were moulded in red and blue colours respectively. From the descriptions it can be seen that the Set wasn’t a copy of the Novo Set but a re-engineered product to suit production methods or requirements of the Socialist countries. 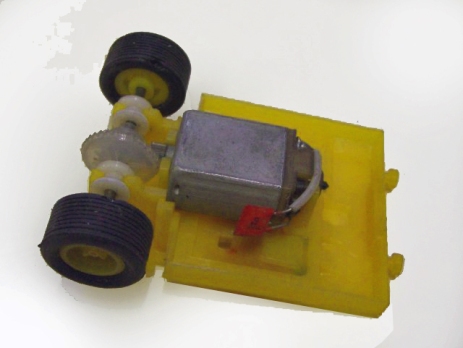 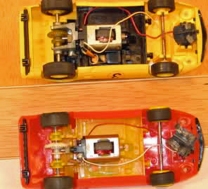 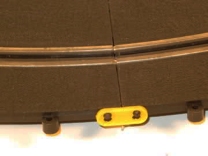 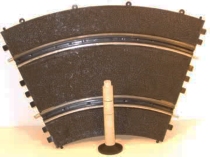 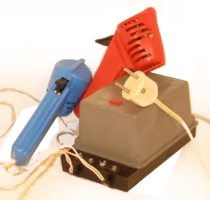 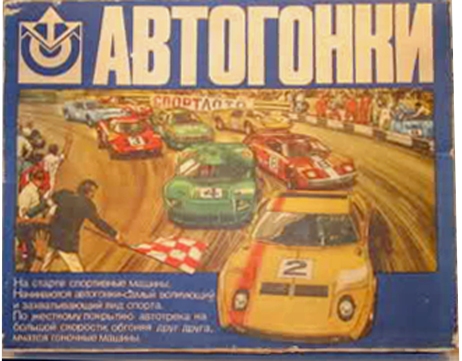 So, at first glance, the Soviets did make Scalextric sets in Moscow for Russian and the Eastern Bloc countries which, whilst NOVO exported Sets made in St. Petersberg, Russia to the UK. The statement from DCM infers that there was an agreement with the Russian State to make slot racing Sets using tooling and intellectual property (IP) supplied by DCM. It would appear that NOVO, having the tooling for the car bodies and wheel hubs and a supply of motors, produced a quantity for the Russian producer(s). However, as all components (with the exception of the car bodies, motor and wheel hubs) have been re-engineered the resulting slot-racing product can’t be called Scalextric at all, although it is a distant comrade.

Other products involved in this international arrangement with NOVO included FROG plastic kits and BIG BIG TRAIN – also produced in the Scalextric factory at Margate.

In 1977, Novo Toys applied to Peterborough council for approval for factory and office extensions and for retention of temporary office buildings but both were not approved by the council. Novo ceased trading in 1980 and liquidation was completed in 1985. 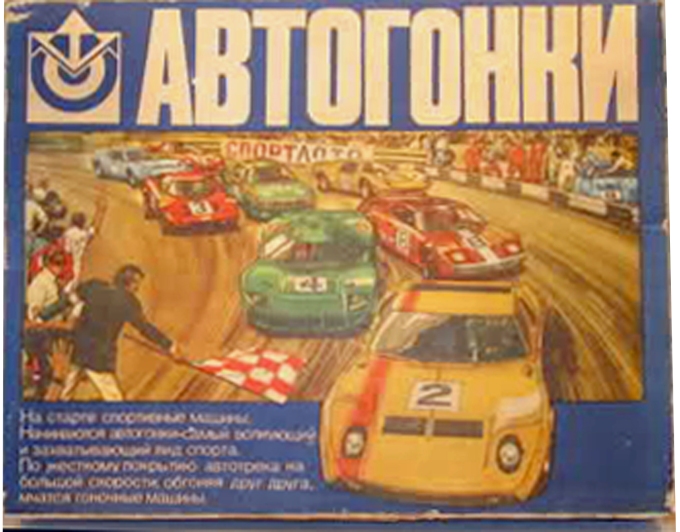