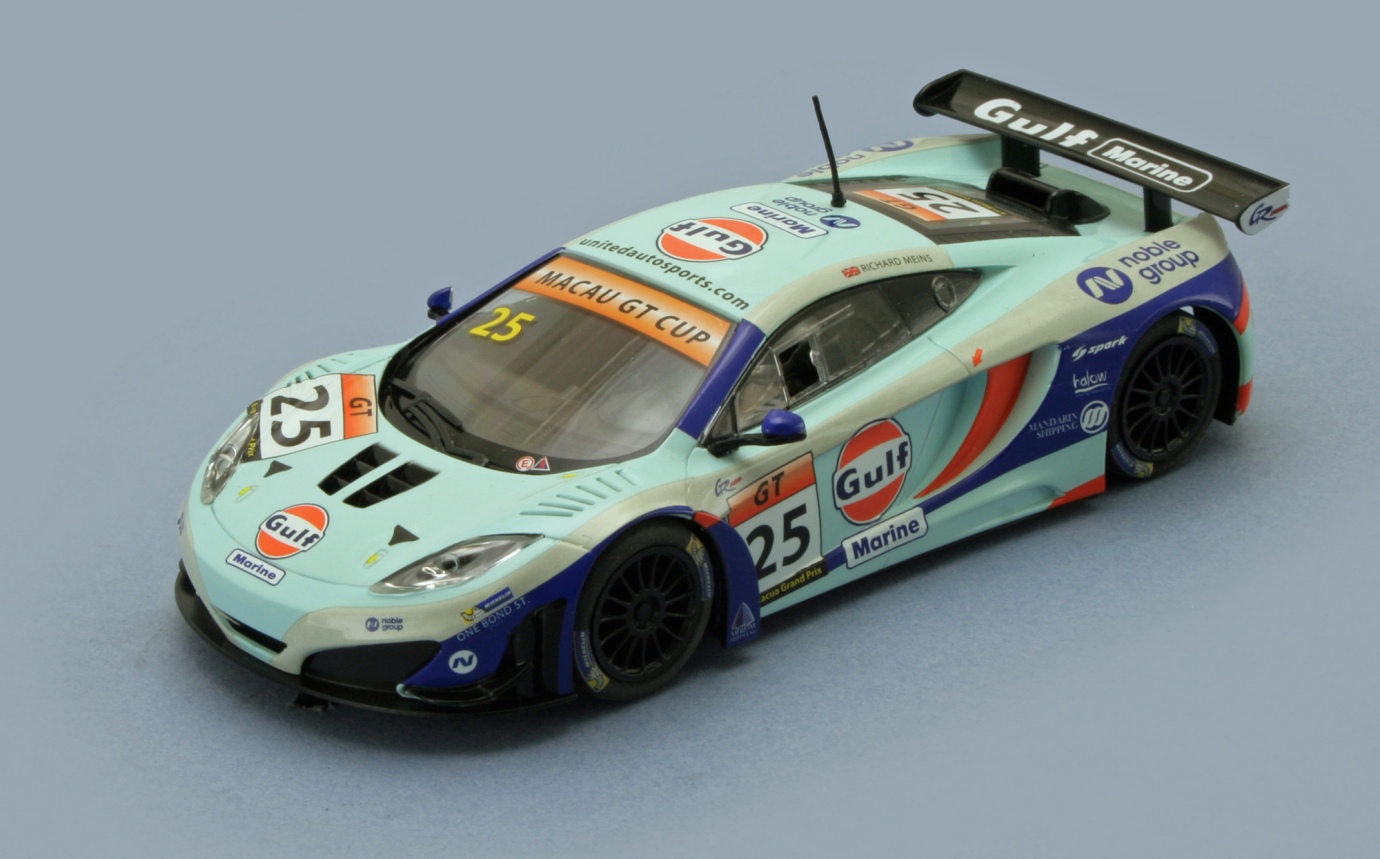 Whether you are a collector or racer, the Gulf liveried racing cars have always been amongst the most popular slot cars. There is a very concise range of Scalextric cars making it an achievable, and displayable, collection theme. For the racer, the ‘Gulf’ range primarily comprises sports cars, most of which are pretty good racers.
One of the definitions of the word ‘gulf’ is to describe a large difference, or division between, two groups, or between viewpoints, concepts, or situations. Fitting then, that ‘gulf’ liveried cars have a very strong following of two groups of slot fans carrying the opinions that gulf liveried cars are ‘shelf queens’ or ‘for racing’.
Why do racers like them? The livery is attractive and, importantly, its bright, vibrant colours can be easily spotted on a black slot racing track. Why do collectors like them? Gulf liveried slot cars are evidence of a long history of success for GULF, the global oil company, in motor sport.

GULF, the company.
Gulf Oil was a major global oil company from 1901 until 1985. Its beginnings go back to 1901 at the enormous oil gusher on Spindletop Hill, Texas. Gulf was the first oil company to enter the consumer gasoline market when it opened a drive-in filling station in Pittsburgh in 1913.

GULF, the colours orange and blue.
It was 1967 when, the now iconic Gulf racing colours, made their first appearance. Gulf’s corporate livery of dark blue and orange was considered too muted for team car colours, so powder blue and orange (the colours of the recently-acquired Wilshire Oil Company) were chosen to reflect the vibrancy of the brand. It wasn’t until forty years on that Gulf became the first lubricant company to officially trademark its racing colours.

GULF, motor sport.
Gulf’s star-studded motor racing record extends further into history than many people can recall. It was Gulf’s interest in frontier-extending motor racing research that prompted it to attack the Indianapolis 500 with the fabulous rear-engined “Gulf-Miller” four-wheel drive cars as long ago as 1938.

The Gulf-JW Automotive team became a legendary force between 1967 and 1975 with the Ford GT40, Porsche 917 and Mirage cars. Gulf achieved victory at Le Mans in 1968, 1969 and 1975 as well as taking World Championship Sportscar honours.

After the sale of the Mirage team it was almost 20 years before Gulf made a welcome return to the international motor racing arena.

Between 1995 and 1997 Gulf renewed its successful link with McLaren in sportscars, with the racing version of its million-dollar road car – the McLaren F1GTR.

The Gulf-McLarens broke with tradition and ran in Gulf’s official corporate colours – dark blue and orange – for two of the three seasons before reverting to the iconic Gulf racing colours in 1997. During this time the team took nine race wins and won the Global GT Championship title in 1996.

SCALEXTRIC models
In the 20th century there were but half-a-dozen GULF livery SCALEXTIC cars to choose from but in the new millennium this has exploded and you can now collect over twenty different models and twice as many liveries. This is mainly due to GULF’s involvement in motorsport and teams such as Aston Martin Racing with the successful DBR9 and the Aston Martin LOLA LMP1 car. They also supported the McLaren 12C GT3, the Aston Martin Vantage GT3 and more recently the Porsche 991 RSR and Mercedes AMG-GT3 teams. 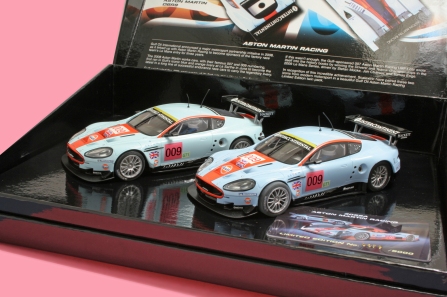 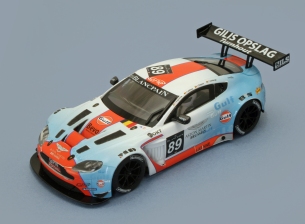 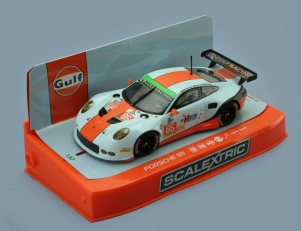 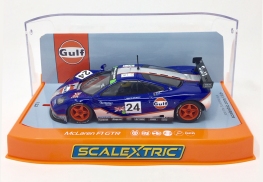 Of course, many private teams and drivers gained sponsorship, had a working relationship with, or simply ‘borrowed’ the GULF livery or likeness to it, for their race cars as, indeed, did toy car makers. SCALEXTRIC produced several more GULF liveries on Ferrari, Porsche, Lamborghini and Caterham cars. 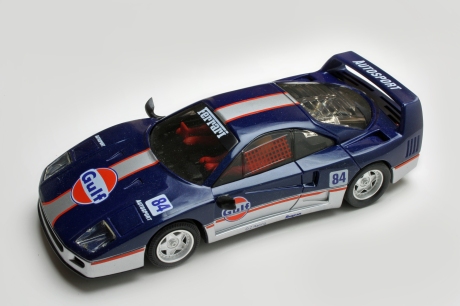 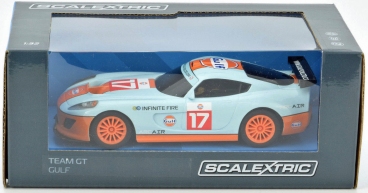 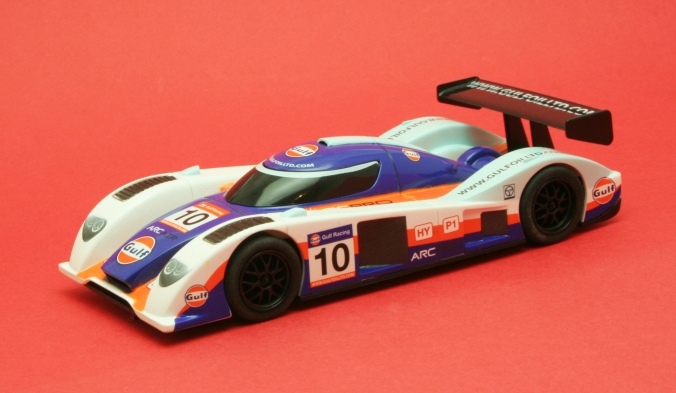 OFFICIAL SCALEXTRIC GULF BRANDING
During the last 5 years, SCALEXTRIC has developed their license with GULF to produce the GULF branding with an orange plastic display base and branded inlay card with the GULF logo.

For a more complete picture of all the GULF livery models produced by SCALEXTRIC please refer to the Scalextric Ultimate Guide, 8th Edition.