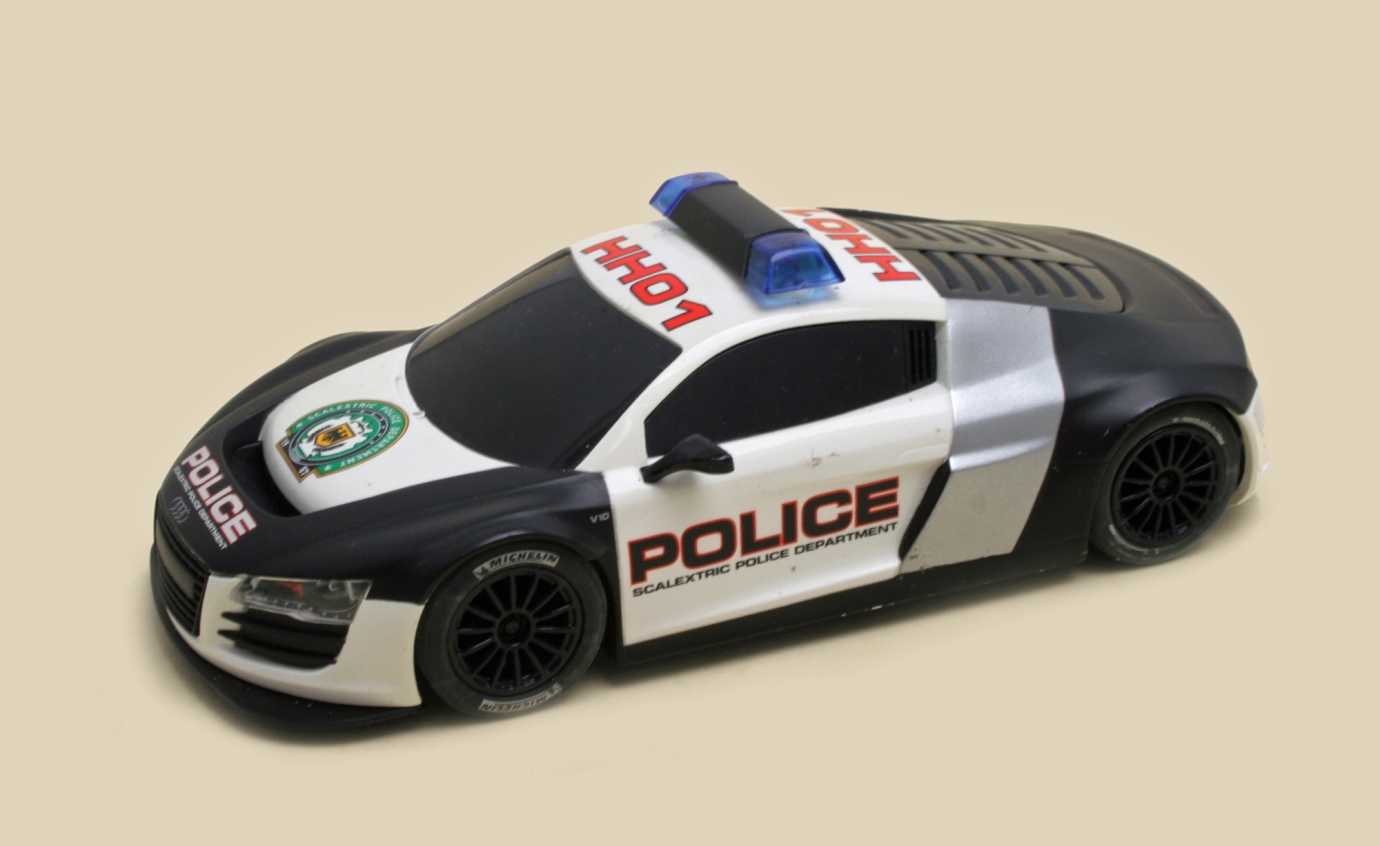 Quote: “So I was like, ‘I want to be either an undercover cop, or I want to race cars!’”
Well, you can do both with Scalextric.

For many years Scalextric have produced models of police vehicles often with working lights and sometimes (to parents’ annoyance) a working siren. Enjoying Scalextric is not always about racing and the addition of these cars can add more play value with car chases and other ‘cops and robbers’ games, perhaps as an alternative using the 4×4 Trucks and Articulated Lorries that have been available in the past. The ‘super resistant’ bodies with no interiors are very suitable for this type of fun. Many set circuits feature a crossover, or the section can be purchased individually, so that skill and judgement are necessary to avoid or possibly to force your opponent off the track. The use of chicanes and sideswipes will add even more excitement. Add Scalextric Digital in to the equation and the game-play options are endless.

The Scalextric models range from the recently produced 1960s Mini Cooper ‘Panda’ car, the Rover 3500 of the 1980s to a Lamborghini Gallardo. An attractive model is the Range Rover used by many traffic police departments, this comes complete with working siren and lights. The Range Rover from the set has a 360 degree guide blade assembly instead of a standard guide blade. Other models include the Ford Sierra Cosworth, Subaru Impreza, Vauxhall and Opel Vectra, Ford Focus and Ford Crown (Batman), the BMW and Audi of the German Police and the Alfa Romeo 159 used by the police in Spain. The C3149 Alfa Romeo 159 of the Guardia Civil Trafico is particularly noteworthy in that the siren is a digital sample of the real car’s siren recorded as it drove through the streets of Madrid. The sample lasts for a long time and transitions through the multiple sound voices used on the real car. The Italian police are also represented by an Alfa Romeo 159 and the previously mentioned Lamborghini Gallardo! – One lucky police driver. Two quite rare models are the Vauxhall Vectras of the Jersey (Channel Islands) and London Metropolitan Police. The Lamborghini Diablo is a rare beast hand-decorated and fitted with the lights and siren at the factory to prove that the electronics could be fitted within such a confined area. Alas, it was never released. 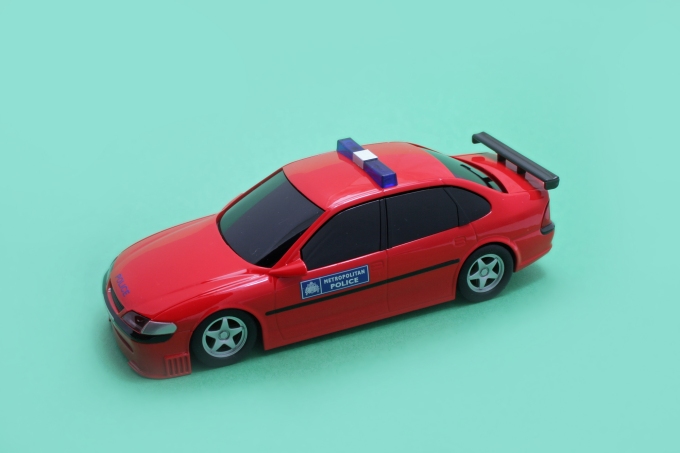 Terms for police cars include (police) cruiser, squad car, area car and patrol car. They may also be informally known as a cop car, a ‘Black and white’, a ‘Cherry top’, a ‘gumball machine’, a ‘panda car’,   ‘jam sandwich’ or ‘battenburg’. But what of these markings; 24 – 46 TD18 – D8 – A 06 – 20 173 – 679 – 12 641 – 20 641 – 44398 – HH01 – HH15 – HH18. What do these mean? Don’t worry this isn’t a keyboard malfunction or a secret code used by the police but they should seem familiar. They are the references printed on the police car roofs. The police forces reflected in the Scalextric range were quite happy not to have their cars replicated too accurately and would usually request deletions or amendments from the real-life cars. So, often, shortcomings in the various constabulary’s insignias and car markings were left to the discretion of the model decoration team.

The roof markings would often seem random but actually reflect the birthday, age, and initials of the decorator, family or friend. However, the latest Audi R8 police car (C3932) follows a new rule – the year of release. The roof number is HH18 which simply equates to Hornby Hobbies 2018, the same is true for the HH15 QuickBuild car but not for the very first Audi police car bearing HH01 on the roof which was simply the first basic reference in the HH name convention. We will have to wait to see if the format continues.

Which to collect, then? “The best car safety device is a rear-view mirror with a cop in it!”

Police cars are all collectable and will always be popular. Throughout the past thirty years the standard production releases have never commanded high values despite their theme popularity. Whether from the 1980s or from this decade the Scalextric models can always be purchased at a cost near their original retail price. Pre-production or production errors can be found for all examples of Scalextric police cars and standard production items are always available. Collecting police cars is an achievable objective at a reasonable price or treat yourself to a jam sandwich or a slice of battenburg. Tough choice!

Reference: Scalextric Ultimate Guide, 8th Edition.
If you believe you have a yet unrecorded variant and seek confirmation of its authenticity, please contact me at slotcarportal.com.